When you change from a horizontal two ply twill to a vertical one, or vise versa, you are making a pattern called herringbone or ʻekeʻeke in Hawaiian.

I couldnʻt find any written description on how to do this, so the following is my approach using trial and error. Another item for discussion with your kumu ulana…

In the first weave change (going from maka moena (check) to maka ʻoʻeno (horizontal two ply twill), we followed Jim Skibbyʻs approach for making a practice board (Chapter 3). This approach uses lauhala koana/mauʻu instead of plastic strips as I had done elsewhere. I do recommend using Jimʻs approach and find that the lauhala is surprisingly durable with respect to repeated folding and unfolding. I taped my lauhala strips to an old plastic cutting board to keep them from moving around.

First Stage – Fixing the Height of the Change 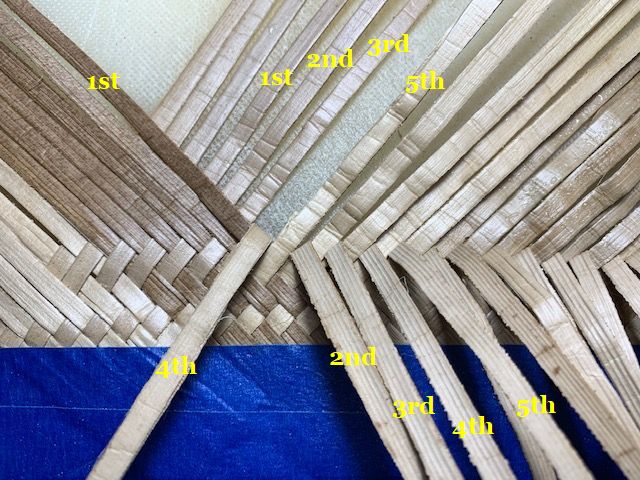 Weʻll continue using the moe, ku and ulana terminology in Jim Skibbyʻs book. These are common terms used by weavers and are defined HERE. In the photos shown here, the moe go from lower right to upper left and the ku go from lower left to upper right. Another Hawaiian term weʻll begin to use is pelu meaning to fold.

There are a lot of labels in Figure 1. I hope you will eventually agree with me that because no one is here to physically show you how to do this, this compromise will suffice. So Figure 1 shows the 4th ku pelu over the 1st moe. Because we are now fixing the height of the weaving change, we will be using the 3rd, 2nd and 1st ku in that sequence as we progress. 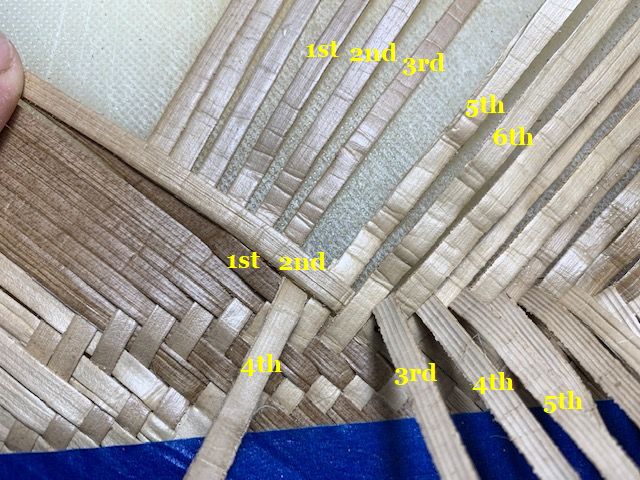 In Figure 2 the 2nd moe now overlays the 5th, 3rd, 2nd and 1st ku. Weʻre ready to pelu the 4th ku forward and then pelu both the 4th and third ku back. 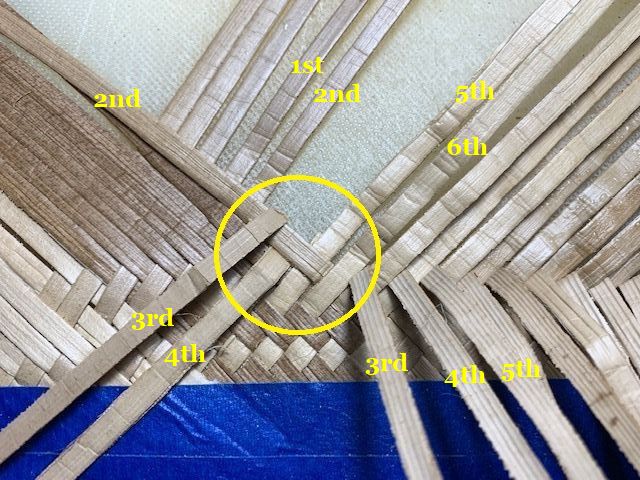 When I weave, I find that looking for patterns that repeat helps me a great deal. In Figure 3 I have circled the weaving pattern for the vertical twill. Two koana pelu back (the 3rd and 4th ku) and two koana remain forward (the 5th and 6th ku). Jim Skibby terms this pattern or unit a maka. I suggest that this is part of the meaning when weavers talk about “two up, two down” when weaving the twill pattern. The other part involves the actual weaving mechanics which weʻll talk about shortly. 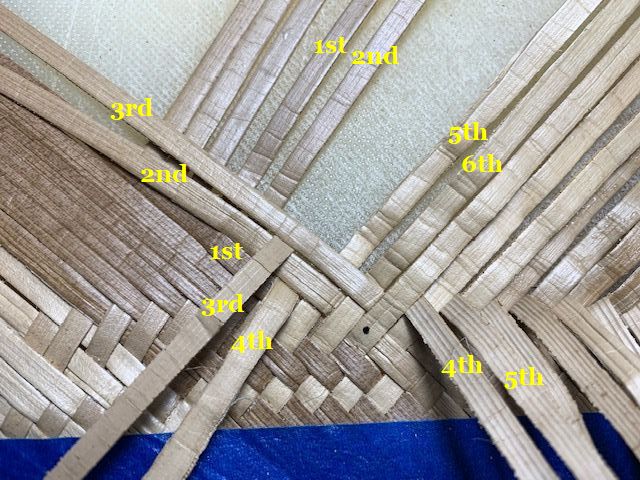 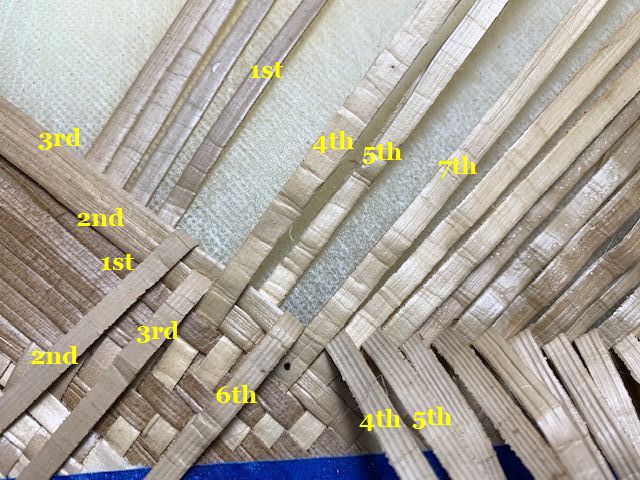 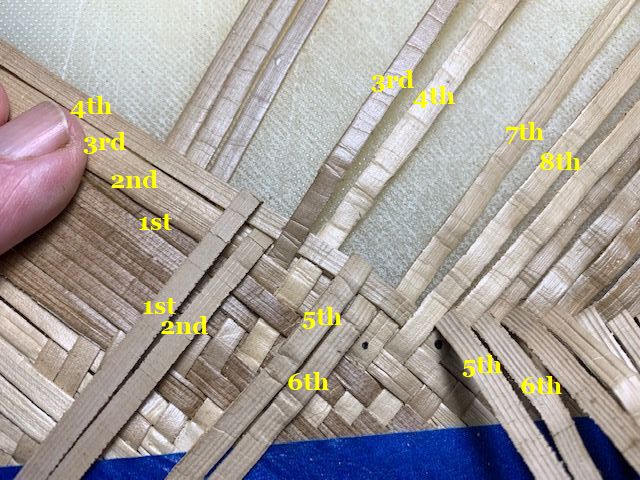 Figure 6 shows the results of our ulana following the laying down of the 4th moe.We pelu the 6th ku up and then the 6th and 5th ku down. We pelu the 3rd and 2nd ku up and pelu the 2nd and 1st ku down – “two up, two down”. 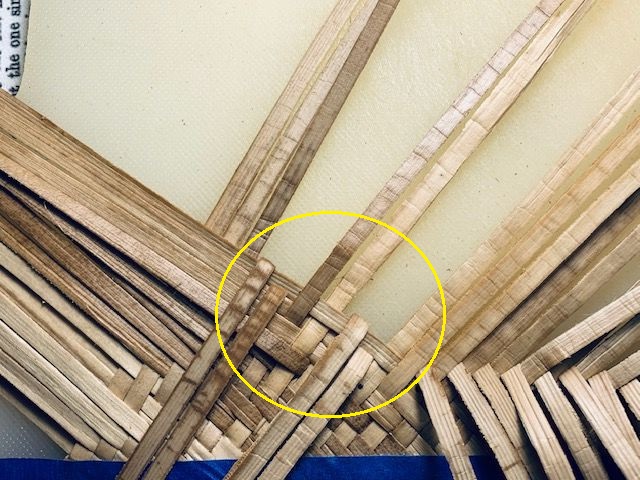 We now have two maka. Letʻs stop increasing the height of the weave and begin moving across to the right.

Stage 2 – Weaving to the Right

I have repeated showing Figure 7 because it is this pattern which we want to repeat as we change from the horizontal to vertical twill:  two pairs of “two up, two down”. Once again, the moe go from lower right to upper left and the ku go from lower left to upper right.

Iʻve also re-numbered the koana/mauʻu. Again, the figures will look a little busy but it was the only way I could figure out how to keep track of things. 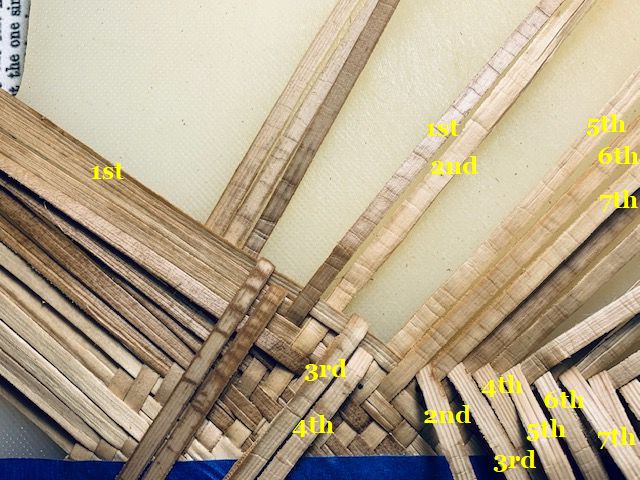 Figure 8 shows where we left off at the end of stage one with the new labeling in place. 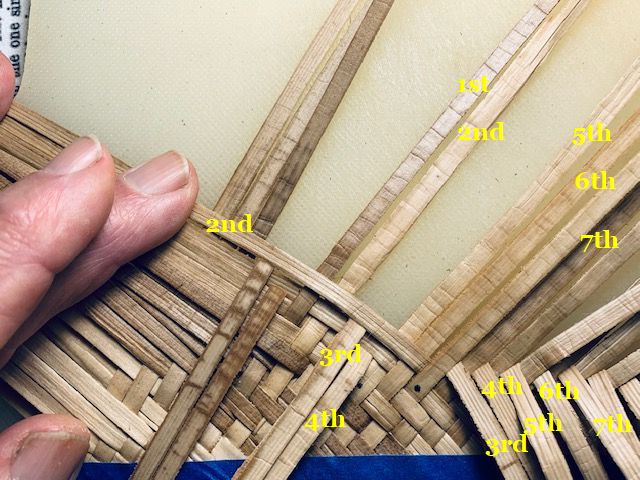 In Figure 9 the second moe is being laid down and itʻs time to ulana. 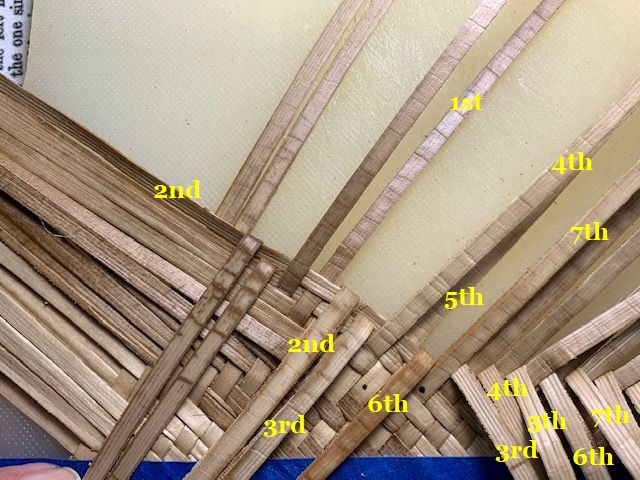 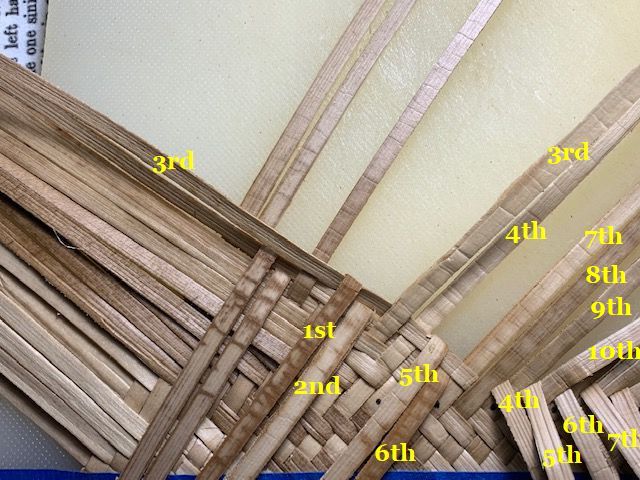 Figure 11 shows the 3rd moe lain down then ulana:  the 6th ku pelu up then the 5th and 6th pelu down; the 2nd and 3rd ku pelu up and then the 1st and 2nd ku pelu down. Now we have the same “two up, two down” arrangement that we started with. Note that the 9th ku in the corner is underneath the 4th moe. 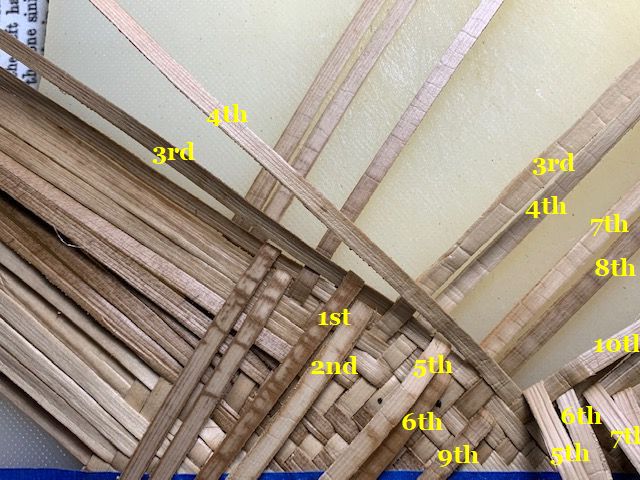 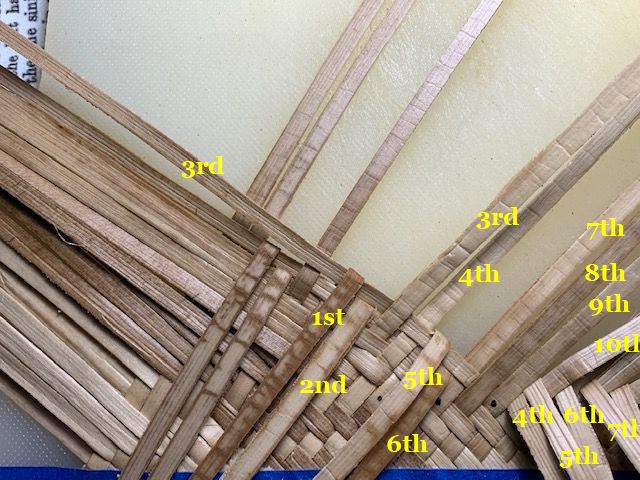 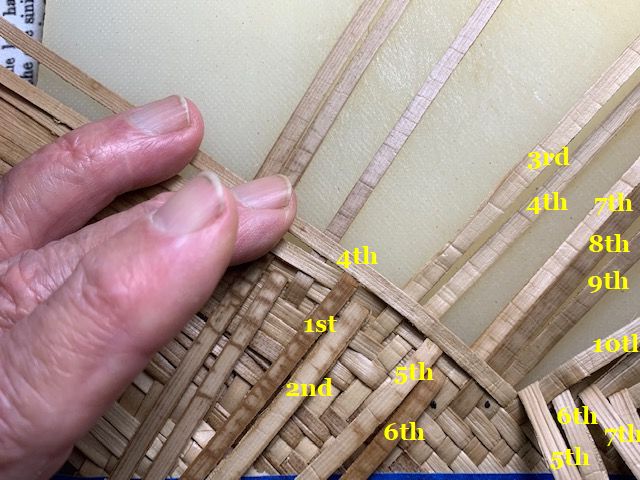 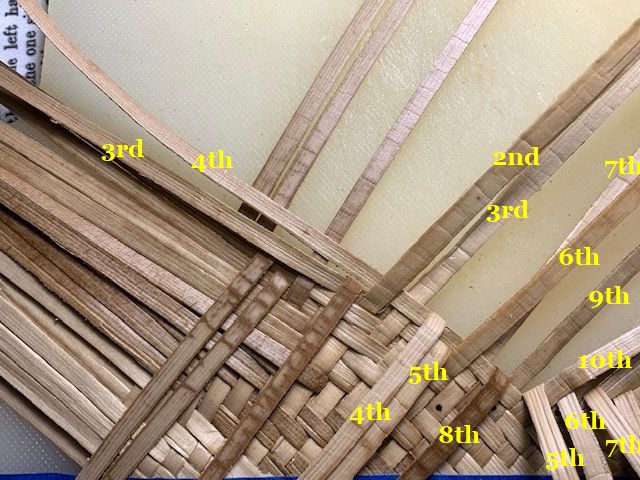 Figure 15 shows the results of the ulana described for Figure 14. Now time to pelu the 5th moe and ulana. 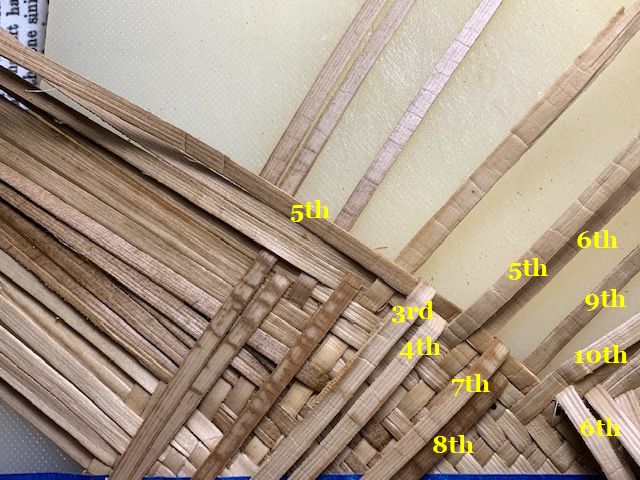 In Figure 16 the last ulana of the cycle is finished and we have our starting “two up, two down” configuration as shown in Figure 17. 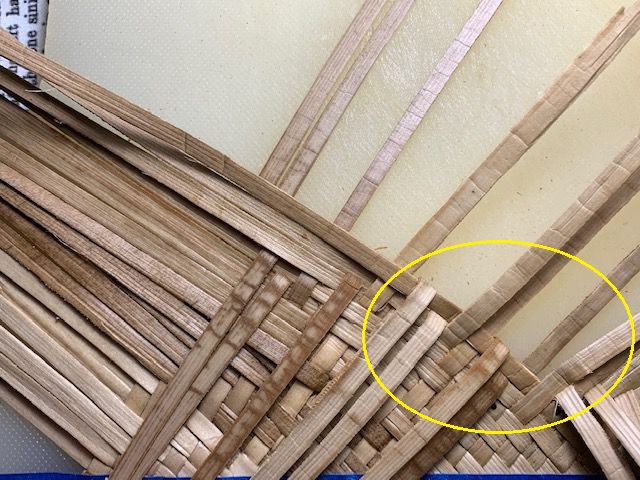 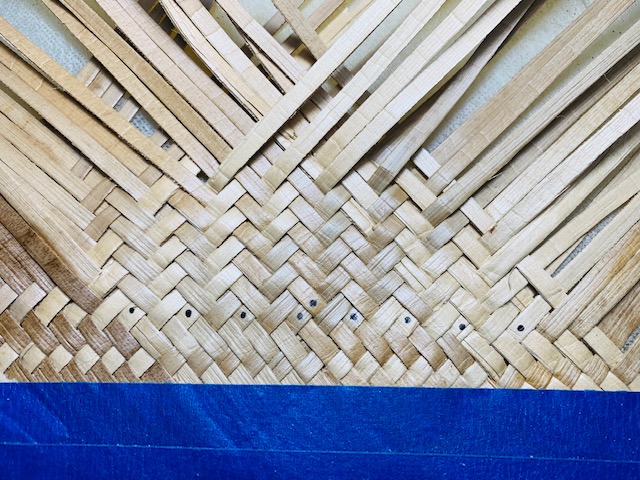