What follows is a description of the process I use to make bird song/call recordings. These recordings are not of scientific quality but they are sufficient for recognizing different bird species.

http://www.bio.umass.edu/biology/kunkel/gjk/homepage.htm – this is my primary link for making an inexpensive parabolic sound collector. Greg’s instructions are simple and clear.

http://www.naturesongs.com/Sounds.html – Doug Von Gausig records bird songs using a Sony Minidisc recorder. The instructions on this link are what enabled me to get recordings from the Sony Minidisc to my computer.

http://audacity.sourceforge.net/ – This is the free software that I use for transferring sound files from the minidisc recorder to the computer and then editing them. I think it’s a wonderful program and very easy to use.

http://www.birds.cornell.edu/MacaulayLibrary/contribute/fieldtechniques.html – gives a thorough overview of recording bird songs/calls at the highest level of quality.

Many additional references can be gleaned from the Internet by Googling “bird song recording techniques” (without quotes).

Equipment – This section describes the setting up of a simple sound recording system for less than $300. Highest quality recordings can cost nearly 10 times this amount but for the amateur recordist such expenditures may not be necessary.

The first two figures show the Edmund Scientific parabolic reflector and Sony ECM-DS70P electret condenser stereo microphone. The attachment of the reflector to a PVC holder and the positioning of the microphone are generally the same as on Greg Kunkel’s web page cited above. The front and back of the reflector have been spray painted to reduce reflection.

The third figure shows the completed setup with earphones and microphones hooked up to their proper input and output locations on the Sony Walkman NZ-N710 minidisc recorder. 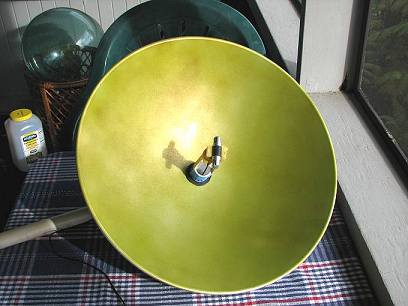 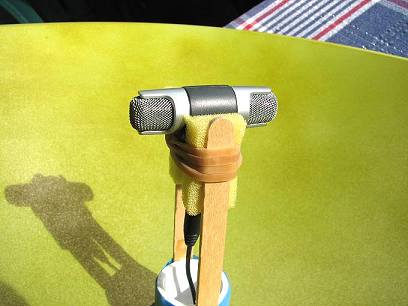 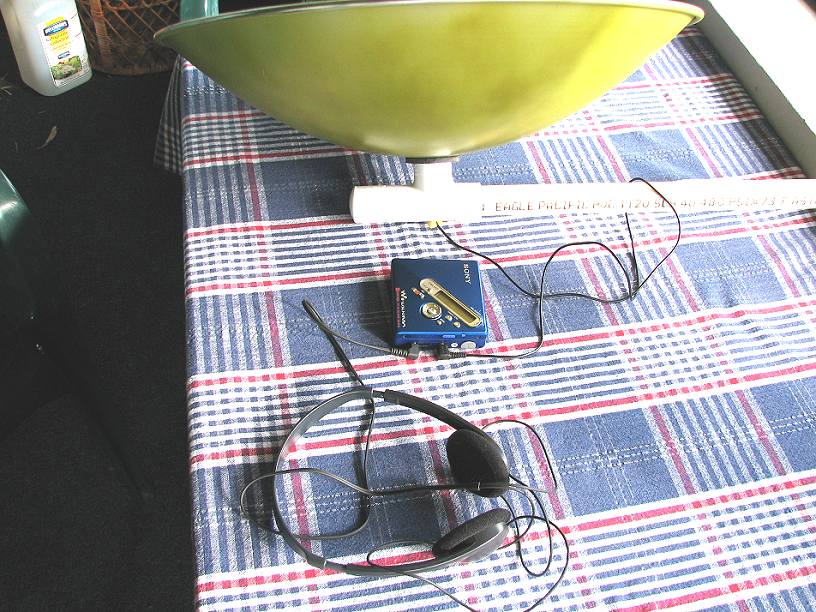 Recording – given that my recording experience level is so modest, it would be pretentious for me to offer “advice”. Rather I simply suggest that those suggestions regarding recording technique by more experienced recordists such as those at the birds.cornell.edu website be followed. That is; be patient, unobtrusive and careful. I usually make my recording lengths in the 2-4 minute range to make editing simpler. The sensitivity level of the Sony MZ-N710 is set at the highest level because the Sony microphone has no battery powered amplifying mechanism. The type of recording mode is set at LP2 stereo which allows nearly three hours of recording capability at “better sound quality” as recommended by Sony.

Editing – as suggested by Doug Von Gausig from his www.naturesounds.com website above, the recorded material on the minidisc is transferred to the computer by a cable from the headset output aperture to the microphone input jack on the computer. The Audacity software program is booted up, the minidisc track of interest activated in the PLAY mode and the RECORD icon in the Audacity program activated. There is a low level hum in the recordings which I remove by selecting a short, song-free section of the recording to act as a “Noise Removal” background example, then using CTRL-A to activate the entire recorded section, moving the “Noise Removal” lever to the far left “Less” and activating the software. Some very small level of background distortion can be noticed but in general the volume of this material is far less than the actual bird song/call material. At this point, the edited material can be sub-sampled for very short examples of songs/calls or left in entirety for later additional editing. I then export each file as an MP3 file although Audacity will also allow files to be exported as WAVE files as well.