Fishing with a jig of some sort is probably one of the oldest fishing techniques around. Recently, there has been renewed interest in saltwater jigging with new techniques introduced by the Japanese and quickly modified by others. A nice overview of current techniques and equipment for those of you with excess expendable income is here. Captain Jeff Rogers takes a lot of folks jigging in Kona and has a very useful rigging page here. There are additionally many YouTube videos showing various jigging styles and some amazing catches. Jim Rizzuto has written a series of jigging articles in “Hawaii Fishing” magazine. The Ozzie fishing website www.fishwrecked.com also has some excellent videos from their members who are a very friendly crowd indeed.

It’s possible to spend a great deal of money on rods, reels, line and jigs depending on where you fish and what your target species are. Since I’m on the wrong side of my mid-70’s, happy with fish of less than 50 lbs weight and have no compunction to land them within 5 minutes, lighter, less expensive gear suits me well. At this time, I have three different rigs: a Penn Sargus 6000 spinning reel (recommended by Captain Jeff who has been testing the larger 8000 model with good results), a Daiwa Saltist 40H conventional reel and a Shimano Dendou Maru 3000 Players (the latter a gift from a Japanese friend). The first two reels are teamed up with medium heavy 6′ Shimano Trevala rods and the electric reel uses a medium heavy 7′ Sealine “Interline” inline rod. If you’re into reel servicing and repair, www.alantani.com has an extensive series of color, step-by-step instructions for a wide variety of saltwater reels.

It doesn’t take trying to bring in a little bit larger fish while standing up to appreciate having some sort of stand up rod holder. I bought a simple, light to medium weight gimbal belt from Wal-Mart (~$18) and (of course) modified it for my jigging purposes. A basic problem with the belt was that some of my jigging rods don’t have a grooved base so I needed to have a deeper rod holder that would still be able to handle rods WITH a grooved base as well as those that don’t have one. Also the basic shape of the lower half of the unit was completely incompatible with my own body shape. 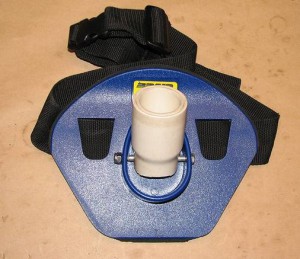 Can’t have any boat thing w/o PVC as a part of it so I cut off the rod holder from an earlier try, rounded the ends so that the rod holder would rotate more in the new belt and enlarged the side holes of the rod holder for the existing 1/4″ through-bolt. Then I temporarily removed the 1/4″ bolt from the new gimbal and installed the old rod holder, and put the bolt back. Replaced the wimpy 1″ webbing belt with a 2″ one I had in stock. I also removed some of the lower plate material on both sides to make the bottom half more shaped to my lower abdomen. Not shown in the picture is an additional amount of black foam padding tie-wrapped to the bottom edge for just a little more comfort…

When I first started jigging at the FADS ~2005, I was using a modified jig described by David Itano in Hawaii Fishing News. Basically, it’s a piece of sturdy wire 2-4′ long with a weight in the middle and swivels at both ends. A 6′ 40 lb test leader at one end ends with a 1/0 or greater Mustad 7766 tarpon hook and a 3″ curly tail. This is great for rats (small ahi) at the buoys at 100-300′ water depth. The jig is lowered down below the school and with a long rod and heavy spinning reel, great upward sweeps are made, reeling in between sweeps. 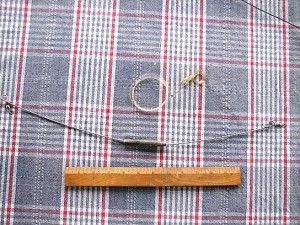 I now (2008 and onward) mostly use jigs of about 5 oz. (~150 gm) when using the Sargus and Saltist reels in water depths of 150-300′. When using the electric reel and using the power retrieve, 6-7 oz. jigs and a little deeper water depths are possible for me. I like the Daiwa Saltiga Braided Boat line which changes color every 10 meters and have a little “cheat sheet” with the colors listed in order sitting on top of the battery box. I use the PE-5 line strength which is ~ 70 lbs and available at S. Tokunaga Store in Hilo.

There are now hundreds of different jigs available on the Internet and in stores. There are roughly two categories of jigs: bottom weighted and center weighted. Recently I bought a Do-It Flutter jig mold which makes a ~center-weighted 5 oz. jig which sparkles beautifully on the descent. This jig has been very successful for me for catching ulua (Giant trevally, Caranx ignobilis) and kahala (Greater amberjack, Seriola dumerili) both on the drop (kahala) and retrieve (ulua). The two on the left have been crudely spray painted while the one on the right has a simple overlay of the WTP flexible scale pattern #521 (readily available at Wal-Mart). 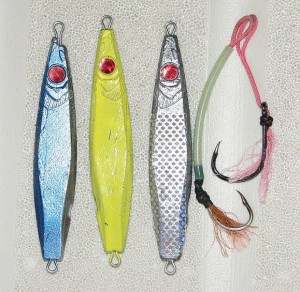 Bottom weighted, less expensive 5-6 oz. copies of Shimano’s Butterfly jig also work well and can be used at greater depths because of their faster descent speed than the center weighted jigs. Here are a couple of online sources for inexpensive jigs that I’ve been pleased with: bpi.ebasicpower.com/c/LURE-JIG/ ; WWW.SQUIDJIG.COM

It doesn’t take long to accumulate a number of jigs but the problem of storage, cleaning and ready access on the boat needed an inexpensive solution. I ended up cutting a couple of access holes in a squat Clorox bottle, drilled some 3/8″ drain holes along the bulge perimeter of the underside and cut a number of PVC tubes to length to fit inside. The plastic jar holds split ring pliers (Wal-Mart), needle nose pliers and a few extra assist hooks. At the end of the day, I just hose out the whole business and allow to drain dry. I’m very happy with the result:

I use # 6/0 94151 Mustad Bait Hooks and mash the barbs on all of them. At ~$7-8 for 50 of them at S. Tokunaga Store, they seem like a pretty good bargain. I use a slightly simpler knot (a two loop thumb knot) to attach the leader to the hook than Captain Jeff (see the flutter jig picture above). The knot is locked with a couple of drops of super glue and the eye and knot covered with Captain Jeff’s recommended eyeglass keeper tubing (available at Foodland Supermarkets) or a short length of heat shrink tubing from Home Depot, Ace Hardware or Radio Shack. The rest of the leader is slid into a short length of 1/8″ i.d. luminescent tubing available here: www.4fishin.com/surgical_tubing.htm.

Jig cutoffs from kawelea/kamasu (Heller’s barracuda, Sphyraena helleri) are particularly irksome and can occur anywhere in the water column. I now use a ~6-12″ length of AFW 7×7 Surflon Micro Supreme 40 lb test leader (Wal-Mart) between my 20′ length of 40 lb test fluorocarbon leader and the swivel. The two are joined with thumb knots; also excellent would be the double nail knot which appears similar but with more turns. I also use the thumb knot to join the Surflon to the swivel. To join the monofilament to the braid, I use either the “Slim Beauty” knot or Captain Jeff’s approach which is quite similar.

But where to go? As described in the Bottom Fishing page, there are a number of drop-offs and ledges of varying depths going from Hilo both North along the Hamakua coast and East toward Kumukahi light house. In the 200-350′ depth range, schools of opelu (Mackerel scad, Decapterus macarellus) appear at depths of 100-200′. Opelu are favorite food for ono (Wahoo, Acanthocybium solandri), as well as various ulua species and kahala (Seriola dumerili).

These schools seem to occur every few miles along the coast and are found most frequently around submarine promontories. By dropping the jig down through and below the school, you have a good chance of attracting the attention of these apex predators. If you’re a troller, it’s a useful exercise to scan the area of your most prominent ono hits for opelu schools and mark them for later jigging fun…

Another approach is to jig in the depth range 150-250′ adjacent to the bottom bouncing locations. I have caught 7-11 lb uku (Green jobfish, Aprion viriscens) in these regions. In my experience, uku tend to hit in mid water depths. I’ve also caught po’ou (Oxycheilinus unifasciatus), a’awa (Bodianus albotaeniatus) – both near the bottom, and yellow spot (Carangoides orthogrammus) and omilu (Caranx melampygus) – mid depths.