If you enjoy the technical side of things, please consider buying my book “Left-brain Lutherie” . Although no longer sold by StewMac, you can buy directly from me.

It’s a reasonable question to ask “Why measure wood properties when so many builders don’t and still make good instruments?” For me the answer is two-fold: first, I feel that these builders actually do make such measurements, but choose to do so using their own senses rather than measuring devices such as micrometers and balances and such. They’ve developed their own internal databases to refer to and function well within that environment. No one makes a great instrument time and again without some sort of reference knowledge. Second, some of us are more comfortable putting actual numbers down so that we can refer to them later when we see how an instrument turns out well. Such numbers are also useful when we want to compare our measurements with work done by others.

But what to measure and why? A preliminary goal is to measure the stiffness of the wood for braces, soundboards and backs. The soundboard and its associated bracing are designed to both withstand the torquing force of the bridge brought on by string tensions and also to enhance and alter natural resonant frequencies occurring in the structure. Soundboards composed of different woods sound different to the trained ear. These different woods have varying inherent stiffness’ as well, both from one species to the next as well as within the same tree.

Rather than throw up our collective hands and abandon the whole project as too complicated for mere mortals to comprehend, we simply devise a strategy to measure the properties of each piece of wood to be used. Although this may sound inordinately tedious, it’s not, since most of those reading this will make relatively few instruments and time is not as much of an issue to the hobbyist as it is in an industrial setting. Further, once the setup has been created, measurements go quite quickly. It is important to appreciate that by making such measurements, a great deal of uncertainty can be removed from the building process because you will know at least some of the starting point properties of your materials.    There are two ways to measure stiffness: statically and dynamically.

See Static Measurement of Young’s Modulus along Grain for more details in this approach.

Simple Experiments, Part 1: The Relative Importance of Ex Compared With Ey For Top Compliance and Frequency shows an empirical experiment aimed at a better understanding of the relative importance of Ex and Ey in determining top stiffness and fundamental mode frequency.

See Dynamic Measurement of Young’s Modulus, Part I: Ex, Ey and Ex,y for details of this approach.

Since most folks won’t have Young’s moduli at their fingertips, the following table is offered for convenience. The woods listed are those mentioned in the newsgroups rec.music.makers.guitar.acoustic and rec.music.makers.builders. More can and will be added as time permits. These are average values for these materials. Unless otherwise noted, the wood data are for materials which are at ~12% moisture content, quartersawn and air dried. For more data, see “Wood Handbook: Wood as an Engineering Material” USDA Forest Products Laboratory, Agriculture Handbook # 72, (1974) stock # 0100-03200. 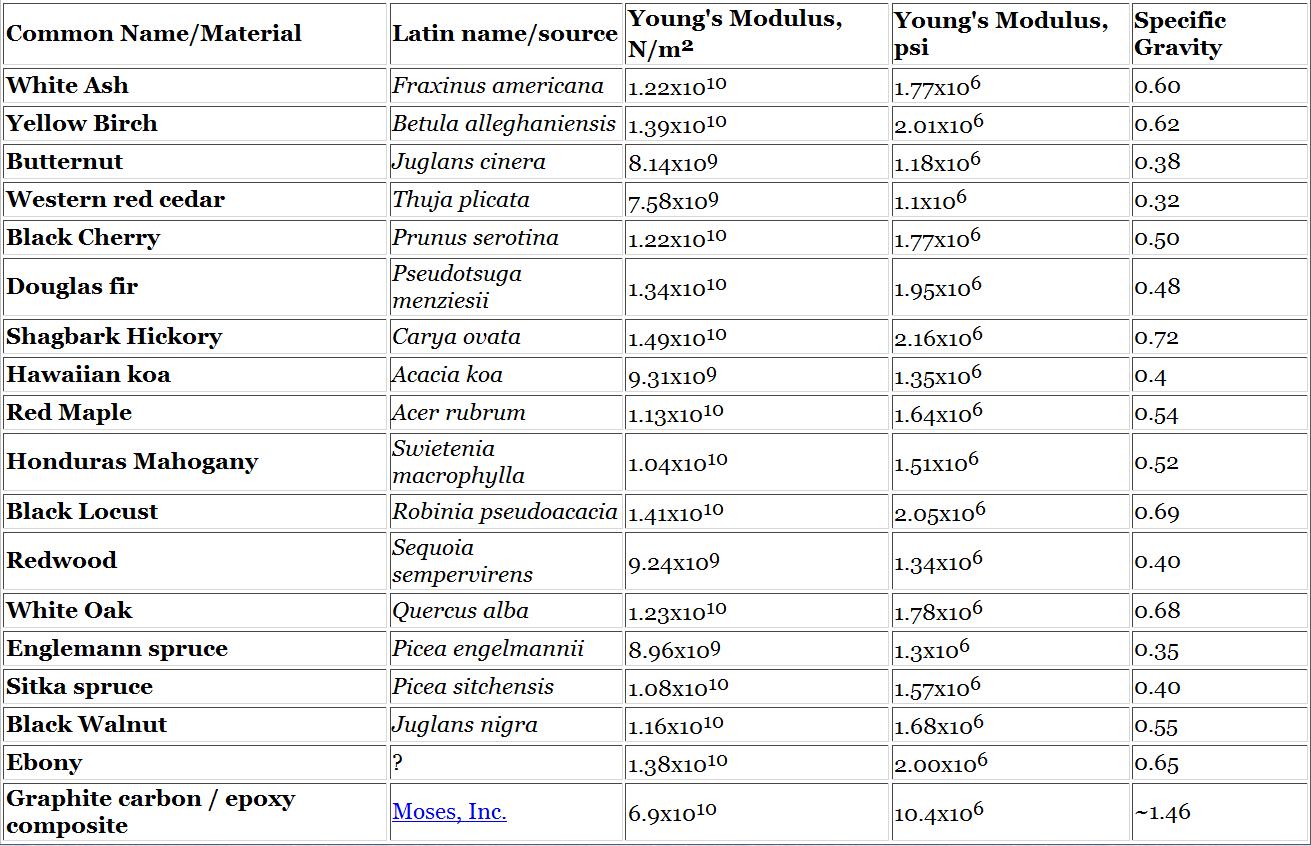 There is a strong positive correlation between density and Young’s Modulus, noticed nearly 100 years ago. For reader convenience, the data above are plotted below.

If you have a sound card on your computer then there are both freeware and shareware software programs which can convert a chord or collection of frequencies such as a tap tone into a plot of intensity versus frequency. Why is this useful? Well, by holding a board by one of its nodes and tapping in the center of an anti-node or mode, then those frequencies produced are the fundamental and its multiples! More complex systems such as guitar tops are difficult to interpret without the additional help of the glitter patterns, but boards are relatively straightforward. I use a program called Cool Edit which is adequate (but not much more) for this purpose.