Twill or maka ‘o’eno is often referred to as the hat weave. This type of weave has been described earlier for rectangular formats. But generally hats weave diagonally down the crown and across the brim. Examples of diagonal hat weave can be seen in the Bishop Museum Ethnology Archives as well as modern websites such as lauhalahats.com .

What follows is one description of the transition from check to twill weave in a diagonal direction. There are surely many different ways to achieve the same result and readers are encouraged to seek such knowledge from experienced kumu ulana.

In the figures below, Iʻm using 1/4″ wide koana so that the folds and overlaps are easier to see. I began by weaving seven koana in the same manner as Figure 9 in this instruction page.  See Figure 1 below. 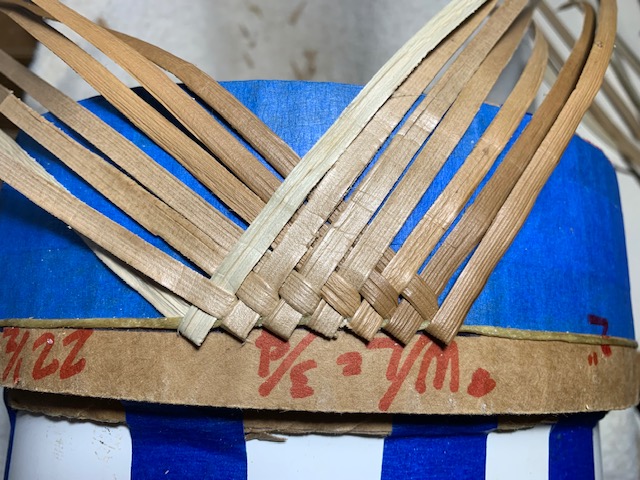 When you weave the twill pattern, one fundamental concept is that each koana must overlap two other koana as it progresses across the weave. A second concept is that when the one koana overlaps these two koana, one of the two being overlapped has just gone under another koana and a second koana has just gone over the same koana. Look carefully at the lower left of Figure 2 at the white koana going from lower left to upper right. It first goes under the first koana to its right, then goes OVER the next two koana. The lower of those two koana has just gone over a koana and the upper of the two has just gone under the same koana. And now we have the very beginning of the twill weave. Figures 3, 4 and 5 continue the process begun in Figure 2. 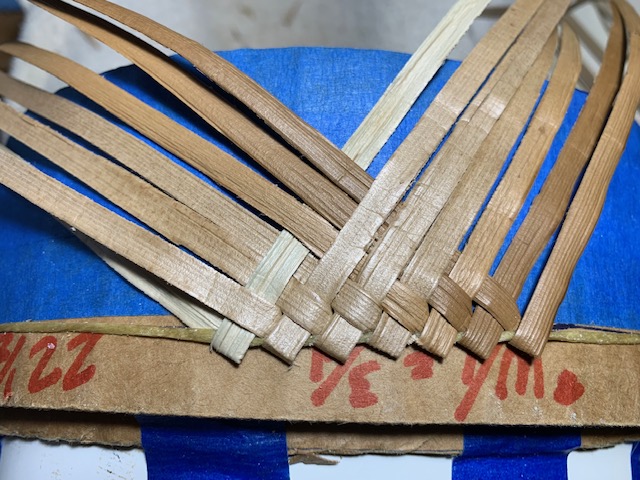 Figure 2. We begin the twill weaving starting at the left.

Figure 3 shows moving to the right one maka. 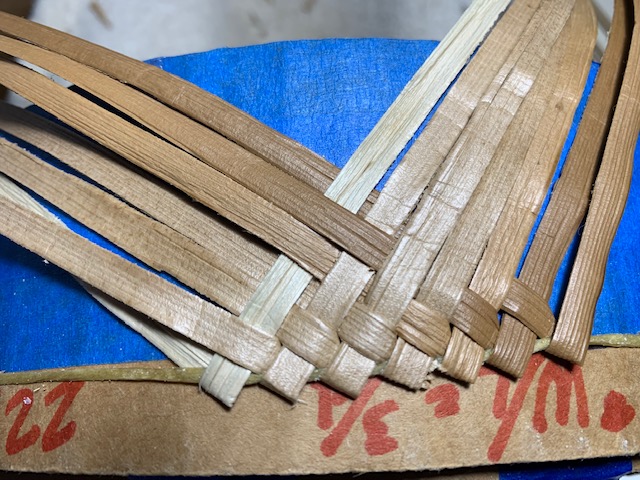 Figure 3. Moving to the right one maka 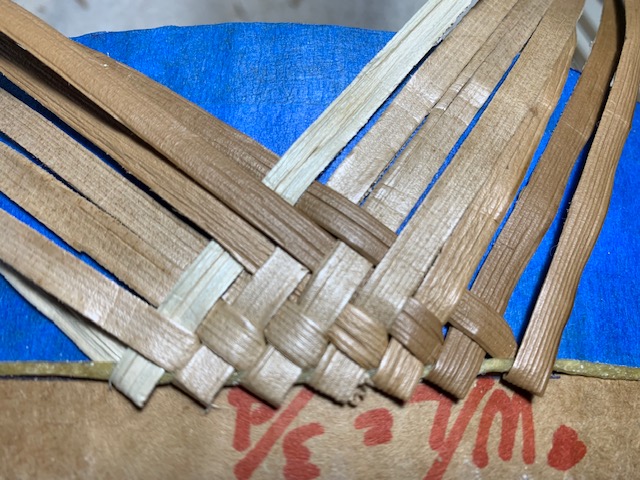 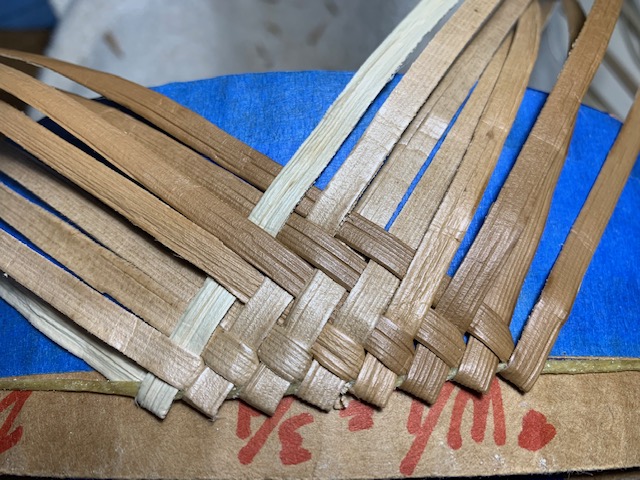 It’s probably time for a quick review of what weaving ( ulana )pattern we’ll be looking for. Figure 6 shows the sequence of folds and inserts for a rectangular sample. But if we just tilt the pattern to the right, then weʻre ready to compare with what weʻve just woven. We want to focus on the middle drawing of Figure 6. The “Fʻs” mark the koana that weʻre going to fold down.

And we have marked similar koana to be folded down in Figure 7. 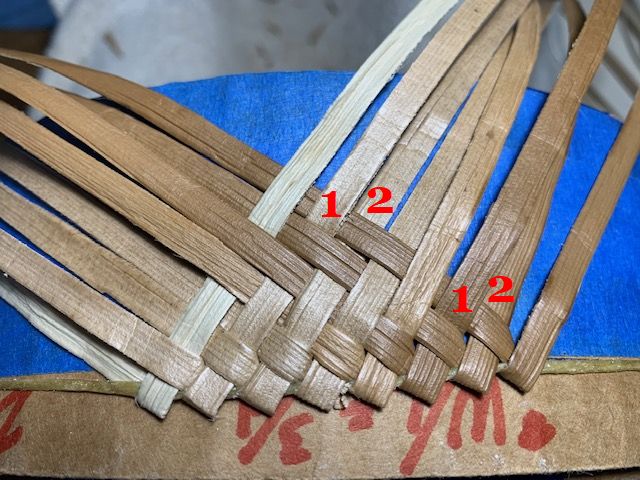 Figure 7. Koana for folding down marked

In Figure 7 we finally have enough koana so that we can begin to show the “two up, two down” pattern of twill weaving. The ones weʻre going to fold down are marked “1” and “2”.

Figure 8 shows the ku koana folded down (except the third one from the right which should have been down) and moe koana going from lower right to upper left. We’re now ready to fold the koana back up and fold the next pairs down. 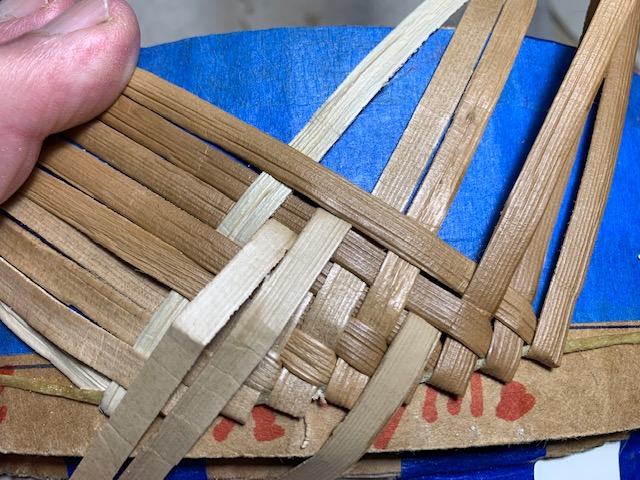 Figure 8. Beginning the “two up, two down” pattern of twill weaving

Figure 9 shows a little further on, with three pairs of ku koana folded down and ready for the next moe addition. 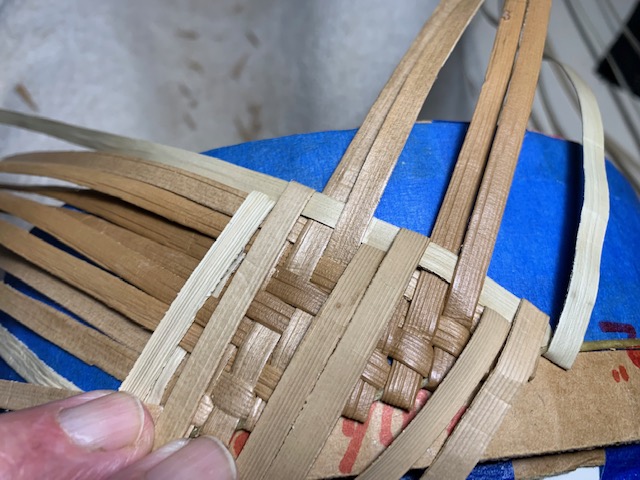 Figure 7. Ready for the next moe koana to be added in

Figure 8 shows the point at which the weaving has reached the bottom of the form ( top of the figure ) and is held in place with a bobby pin inserted into the corrugated cardboard to hold everything in place. 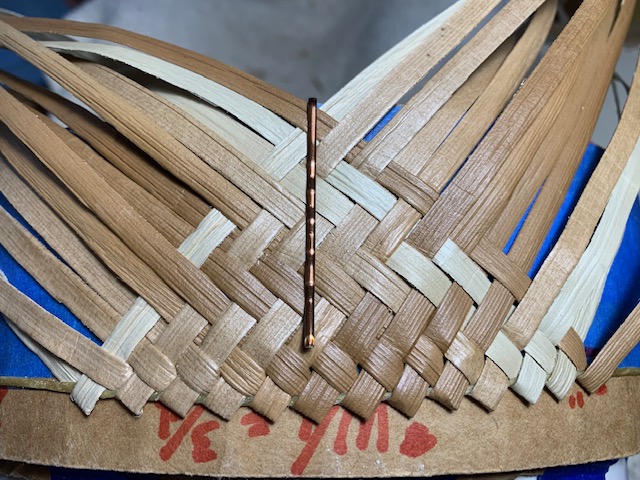 Figure 8. A stopping point when we have added enough koana to reach the edge of the crown.

Weʻre now ready to move around the rest of the ipu and then join up with the edge we began in Figure 1.

Although weʻve used an example with an open edge to start the maka ‘o’eno weave, I believe that this approach should also work with the edge of the piko-pā as well.